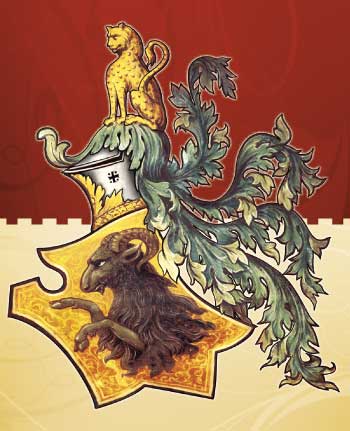 According to the schemes dictated by escutcheon, the coat of arms is composed of a German shaped shield (it had a notch in which the knight could introduce the lance) entirely of golden yellow colour. In the centre there is a ram, symbol of Montone, the birthplace of Braccio Fortebracci’s family.  Above, on the highest side, there is a helmet, representing the degree of nobility, which is silver and with a border of golden leaves on the lower side; it is placed in profile to the right and it has the shape of a sparrow’s beak and it has a swash (lambrequin) made with acanthus leaves.
These leaves had a precise symbolic value in the Greek art and, then, in the Roman. The Greek art used these leaves to decorate the Corinthian capitals; since these elements were symbols of prestige and wealth, it seems clear why they are also used as adornments of heraldic arms. Above the “cercine” (strips of fabric twisted and bent with the colours of the arm, to being put on the helmet and to secure the lambrequin to it) stands out a golden leopard. The animal, symbol of the Lordship of Braccio Fortebracci, is used to indicate the fighting spirit, the military and the political power of the condottiere.

Short history of the coats of arms

The use of the coats of arms began during the Crusades when the Lord, far from his own possessions and mixed up with hundreds of crusaders, felt the need of a signal that could distinguish him from the others. Each knight chose a color and a sign of identity, which constituted an usual means of identification and was considered a privilege of the legitimate family that held the coat itself.
The elements constituting the coat are: the shield, which is the background where are drawn the figures and ornaments, exterior elements of the dignity of the owner; the crowns and the helmets, ornaments indicating hereditary nobility.