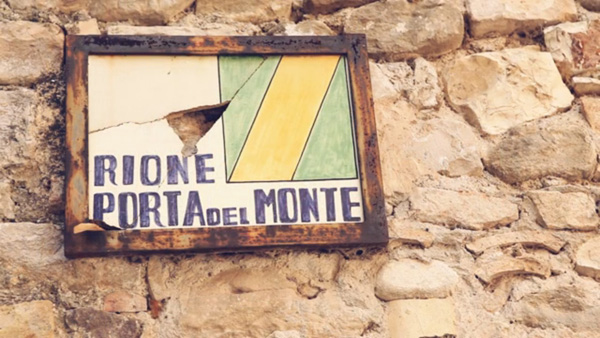 Entering Montone from the Southeast one enters the Hill Gate Quarter which, during the feast ofthe Gift of the Holy Thorn is recognisable by the green and yellow banners hanging from the windows and balconies of the houses. This Quarter includes the original fortress and the houses of the noblemen of the village. In it one still finds the houses of those most noble families who fought for the rule of Montone. Not far from one another, separated by Church of Saint mary are the Fortress of Braccio. Fortebracci and the house of the degli Olivi family, declared enemies and heads of the opposing factions, “ghibellini” and “guelfi”. The former loyal to the Emperor and the latter to the Pope. Through the years the Shakespearean hatred between Lucia, daughter of Oddone Fortebracci and Vanni degli Olivi. In this Quarter its inhabitants like to think that the soul of this noblemen who fought for the control of Montone still wander the streets and that their passions still lie hidden in somewhere in their own soul . The costumes which the people of Montone wear during the celebrations are inspired by those of the noblemen who inhabited this Quarter in the XIV and XV centuries. These were carefully tailored after much research and attention to the detail not only in the styles, and the colourful the fabrics, but also in the jewellery. In this Quarter one can find the Locanda del Monte where meats are grilled and dishes prepared according to the oldest traditions of Montone.