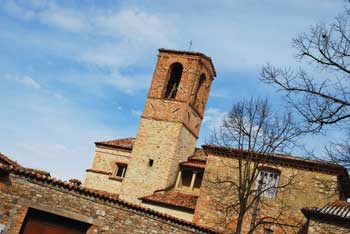 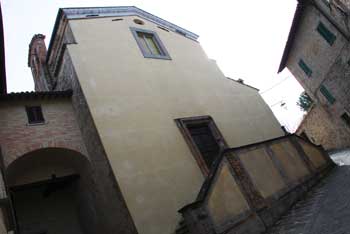 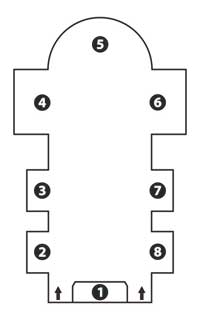 An outstanding coffered ceiling in carved and golden wood stands above the central nave. Four episodes of the life of the Virgin Mary are represented between the moulding and the ceiling. An inscription on the compass dates “1817”. A cloth representing the “Last Supper” was transferred in the Collegiata from the Church of Santa Croce: this painting was commissioned by the Marquise Geronima Bandini Calves to Dionigi Calvaert in 1611 and it can be now admired in the Chapel of the SS. Rosario. Above an altar, on the right side there is a small picture representing the Virgin belonging to the XIV century Sienese school. Then, there is the statue of S. Rocco attributed to the sculptor Romano Alberti (1502-1568) from Sansepolcro (AR) and a great cloth representing Santa Albertina from Montone can be seen before the exit. Finally, the carved walnut sacristy is particularly remarkable.