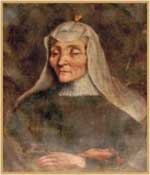 Elisabetta, daughter of Angelo Brunelli and of his wife Giulia, was born in Fratta (now Umbertide, Perugia) the 9th of July 1659. She lost her mother when she was 16 and then fell deeply in love with a young man; he even asked her hand in marriage, but the father and the brother did not want her to marry him, so Elizabeth was entrusted as a pupil, for her safety, to the cloister of St. Caterina da Montone, to which he was accompanied in 1676.
Even if she desired to become a nun, probably on the rebound, she did not give up suitors, so much so that she was seen talking with a young man once. Elisabetta was to be expelled from the cloister, but she begged pardon and all was resolved with a public penance in the refectory.
Nevertheless, she had a correspondence with another young man and a suitor even did a serenade under the windows of the cloister.
To reach her desire to be courted, Elisabetta even prayed the Virgin Mary, but one day she felt an inner answer saying: “How do you presume to receive God’s graces if you offend Him with your vanity and loves?

With this episode began the conversion of the young Elisabetta, who totally changed her life from that moment on. She wore the Benedictine dress as conversa (a nun who has not taken her vows yet) and she took the name of Teresa Serafina. In a little bit of time, word got out that she received graces from God.

Serafina was protagonist of extraordinary mystical phenomena such as ecstasy, transverberazione (a mystical experience in which a person is pierced by an angel or by Christ himself with an arrow or a lance), visions and levitation. She was friend and correspondent of Santa Veronica Giuliani, abbess of Capuchin sisters of Città di Castello.
She also had an extraordinary talent for prophecy. She left an enormous amount of writings, a true spiritual diary, with allegorical and prophetic visions, only part of which have become true so far; this corpus is still mostly unpublished and the manuscripts are scattered in private and ecclesiastical archives.
Two of her most shocking prophecies were about the fall of the French monarchy and about the arrival of a great emperor that would have shaken the world.
She was also a poetess and a sort of “spiritual mother” for all those who have approached her during her life and for those who have approached her writings during the centuries.
He died on October 2nd, 1729 and her body was buried with all honours and it was almost hidden in the Church of San Fedele of Montone, because of the great flow of people that asked for relics.
After her death, the sisters and many of her devotees gathered Serafina’s statements and writings in order to use them for a process of beatification.

In 1828, there was an attempted to make a canonical recognition of the relics of the “Servant of God”, but her body was not found in its original burial: perhaps, it had been stolen or hidden during the French invasion. In 1844, the Bishop Giovanni Muzi officially included Serafina in the list of the “Servants of God” of the diocese of Città di Castello.
The process of beatification could not be continued due to the events of the cloister, which was suppressed several times during the centuries, up to its extinction in 1953. This extraordinary personality has only recently attracted attention again and some of her writings have been finally published. The “servant of God” Serafina Brunelli is commemorated on the 2nd of October, the day of her birth in Heaven.