The Valley of Carpina is an area of great naturalistic interest nestled between the Alta Valle del Tevere and the Appennino Umbro-Marchigiano. It is a catchment of 190 square kilometres where the torrent Carpina and its tributaries determine a succession of hills which disrupt themselves in winding valleys near the watershed: a wild and suggestive territory, largely covered by dense forests of Turkey oaks and downy oaks. 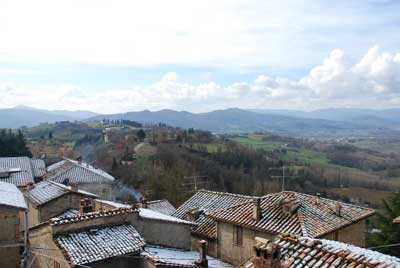 The Territory
Between the 400 m altitude of the valley and the 900 m of the watershed, the combined action of a rather homogeneous marmoreal-arenaceous hill substrate and of a thermo-rainfall temperate sub-Mediterranean condition determine a vegetable landscape which is typical of the areas of transition between the Mediterranean environment (evergreen) and the Apennine hills (deciduous): a mosaic of plant associations in dynamic relationship among them, linked to the phytosociological series of downy oak.
About the Wildlife Population, is really noticeable the presence of some small family groups of Apennine Wolf and of the Hawk, leader of a long and articulated food chain that includes high natural indicators such as the crayfish, the nuthatches and the skunk (reports about huge reliefs species such as the goshawks and the owl have still to be verified).