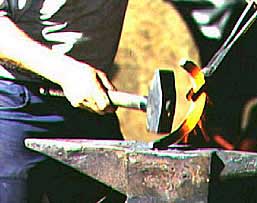 The Region of Umbia is a land of strong scents, vivid colors and its nature gives the visitor strong emotions, but it is also the land where the mastery of craftsmanship, in all its facets, offers unique and precious pieces. Craftsmanship takes hours and hours, modeled by wise hands that for generations have passed the art of father to son, from shop in shop, a land that has its roots in the heritage of the guilds of medieval arts and crafts.
Every two years in the historical center of Montone takes place the “Master Forger Smith” review.
The Upper Valley of the Tiber is a real treasure trove of artisan shops that keep alive the tradition of ancient crafts. One of the craftsmen sector still active is wrought iron workin.
The presence of iron, such as central thread of the historical and economical events, has been a key resource for this territory also able to determine the economic development.
In Montone, a small town in the Upper Tiber Valley, is recognized as one of the most beautiful towns in Italy and linked to the deeds of arms of the family Fortebracci and the famous captain Braccio Fortebracci, still today remains alive the tradition of the masters forgers and the manufacture of iron cantilever. Working wrought iron with artistry and imagination is certainly an art. This is the thought that spontaneously arises in us in seeing the work of Gianluca Volonterio, craftsman of Montone.

In his laboratory and atelier adjacent to one another, there are many jobs made in the course of its ten years of smith. his story begins in Switzerland, where he was born at the beginning of the sixties, and he grew up in the province of Reggio Emilia, until it reaches the turning point in his professional life. After he studied mechanical draftsman and having worked as a solderer, Volonterio attends a course to learn the working of the wrought iron thus combining the processing of the metal with his passion for the natural element of the fire: he moved to Montone and inherited part of the equipment of the well-known local Master Ruggero Capanna and found, in 1988, “L’Infernaccio Masters of Fabbri”, atelier-workshop situated in Viale Sant’Albertino.
He participates in various events and competitions of wrought iron, as some biennials in Stia, province of Arezzo where, in 2001, he won the first prize together with Cinzia Frontino and Roberto Magni, with the piece “Arca”. He is present at various events of the Fiera Antiquaria of Arezzo and he is one of the promoters.