The origin of the Monastery of Sant’Agnese has to be set in relation to the diffusion of the female Franciscan movement (called Terz’ordine) which was introduced in the north of the Valle del Tevere by Beata Angelina of Marsciano in the early years of the XV century. 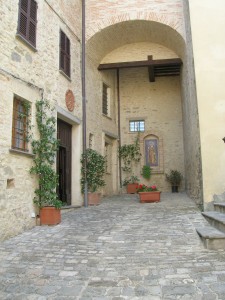 As documented since 1492, in Montone it was also present a community of secular women that desired to live in chastity and poverty, following the Gospel and the example of St. Francis of Assisi. The project of living in a community slowly matured among the religious women but it could be realized only in 1560, thanks to the contribution provided by the local authorities; then, the nuns of the Terz’Ordine of Montone could purchase and restore several houses: those are now forming the monastery’s estate of Via Roma. Inside the monastery, the precious shrine of Santa Spina is guarded.