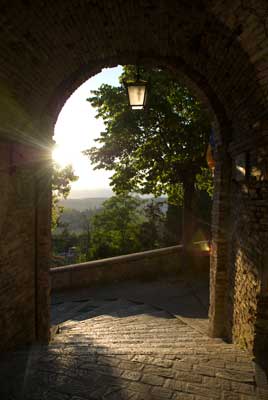 Paths-laying and environmental awareness
The valley is crossed by two paths of national significance:
1) the “Sentiero Italia”, which runs across the watershed of the upper valley within the space of Bocca Serriola – Acquapartita;
2) the Percorso Francescano, which cuts in half the valley in the segment Città di Castello – Pietralunga – Gubbio.
Then there is the Sistema Sentieristico traced by the Comunità Montana Alto Tevere Umbro in cooperation with the C. A. I., which consists of a main longitudinal axis and the Didactic Naturalist Itinerary (IND) Bocca Serriola – Candeleto – Coloti. It integrates important loop paths:
1) the Roman road of Castelfranco, which runs along an ancient way of the I century A.D.;
2) the “Woolf’s loops”, that wind inside the Oasis of Varrea;
3) the “Dragon’s trace”, which connects the main monuments of the valley: the Pieve de’ Saddi and the Rocca d’Aries.
In the municipality of Pietralunga there is the Environmental Awareness Centre (C.E.A.) of Candeleto, which consists of:
1) the Ornithological Naturalistic Museum – Museo Naturalistico Ornitologico;
2) the Didactic Woodland and the Nature Trail –
Bosco Didattico e Sentiero Natura;
3) the Wild Animals Recovery Center – Centro Recupero Animali Selvatici (C.R.A.S. – in progress).
The C. E. A. of Candeleto up and managed by the Comunità Montana in cooperation with the Italian corps of forest rangers;it is also part of a system for environmental awareness with the State Forest and the Valley of Carpina through the Consorzio Altoriberino Risorse di Educazione Ambientale CARDEA which includes:
the Hiking Naturalistic Centre Bocca Serriola;
the biological teaching farm “La Cerqua e la Balucca”;
and the astronomical observatory of Borgo Coloti.
From Caimorone, bearing left through Casaprete and Montescosso, you quickly arrive at Pieve de’ Saddi. At this point, you will be halfway. It is recommended that you stop and get water, but also because you have the chance to visit the ancient Early Christian structure of the Pieve di San Crescenziano.

You continue on the left side of the dirt road and descend to a small votive niche; from here you can climb to Calafuccia, the highest site of the path (638 meters).

Walking down through woods and cultivated fields you will arrive at the Carpina. Arrived at Caigisti, you turn left and go up for about three km to the property of Caigiangi. From this point, you meet the paved road which runs up to the crossing with the county road to Città di Castello. You turn right toward La Madonnuccia and after a descent of about one km and a short rise, you reach Pietralunga: this other Altotiberino centre preserves its medieval aspect intact, with the walled hamlet, the “vigoli”, the parish church and the pentagonal Langobardic Fortress (VIII sec.).