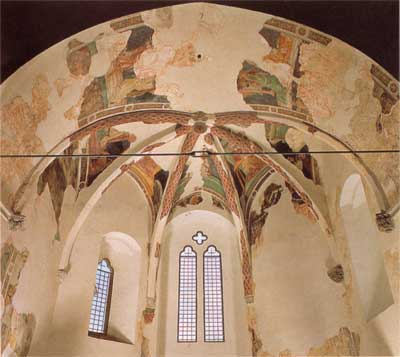 Originally, the frescos covered the entire surface of the apse. What remains, along with traces of sinopia, let us recreate all the previous image: the judging Christ is placed under the arch and on his letf side he is flanked by four Angels with the symbols of the passion followed by the souls of the elect and on his right side from the souls of the damned; on the ribbed vaults there are the four Evangelists who stand aside the risen Christ; on the underlying walls there are scenes from the life of St. Francis, the emblem of the Fortebracci with the ram between two cheetahs and the coats of arms of the cities conquered by Braccio da Montone.